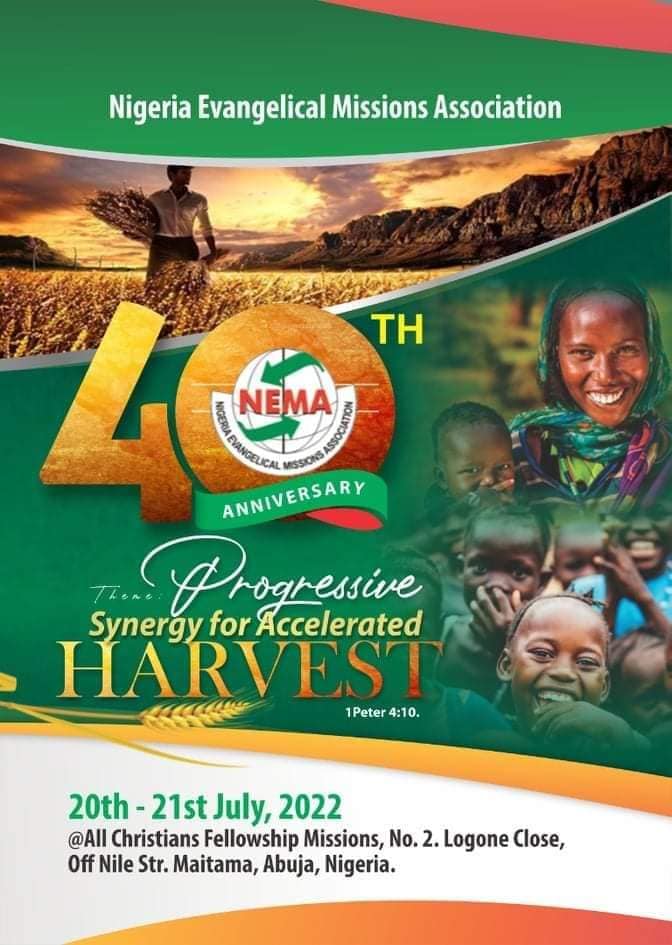 NEMA celebrated its 40th Anniversary with the theme Progressive Synergy for Accelerated Harvest (1 Peter 4:10). It was a well-attended program with participants and speakers from Nigeria and beyond. The program commenced with a glorious time of worship and a fervent cry to the Lord for the salvation of the Nations.

At the opening ceremony, welcome addresses were given by Rev David John Kanda and Mr. Andrew Gwaivangmin, the National Chairman and Executive Secretary of NEMA respectively. Goodwill messages were also  delivered by the following: the host, Rev. Dr. William Okoye; the PFN Chairman in the Federal Capital Territory, Rev. Isaac Komolafe and  Rev. Daniel Appiah on behalf of the Ghana Evangelical Missions Association (GEMA).

The Speaker for the first plenary session Rev. Dr. Reuben Ezemadu, spoke on the topic: “40 Years of Indigenous Missions Collaboration- A Panoramic View.” He shared a brief history of NEMA- the beginning, successes, challenges, potentials and opportunities). One of the highpoints of his talk was the undeniable pioneering efforts and impact of Bishop Samuel Ajayi Crowther, whose footsteps NEMA is modeling today. He concluded by emphatically saying that it is a part of the Anglican Communion and NEMA’s responsibility to celebrate, honor and immortalize, this missional icon: and that it is important for all churches to have a functional missions department.

The second and final day of the conference began with a devotional charge, which was led by the pioneer Executive Secretary of NEMA, Rev. Canon Timothy Olonade. He spoke on the need for NEMA to close ranks with its skills, spirituality and strengths, whilst being mindful of liberalizing without the trappings of ‘Missiological Imperialism’. A grave warning was sounded by him, against projects that are ‘American-dollar’ driven. This he said will result in being drained of God’s power, thus making one a disposable item in the long run. He encouraged all to learn on how to run with God and connect with God’s Kingdom pattern of leadership in order to facilitate exponential growth. He concluded by opining that, we should honour interdependence and the unique contributions of all, as well as strive to console, love and demonstrate fellowship in the Spirit, thereby leaving a legacy of compassion and empathy (Phil 2:1-3).

The National Coordinator for Vision 5015, Pastor Victor Idakwoji reawakened the church as he spoke on Vision 5015 Plus. He gave an overview of the vision and how much has been done in the last 20years. He emphasized the need for synergy to finish the task well and strong. The Praying through the Harvest booklet, a concise background information and prayer manual for the remaining forty unreached and 3 least evangelized people groups in Nigeria, was dedicated and distributed.

The 2nd plenary session was led by Rev Dr. Cosmas Ilechukwu, the General overseer of the home-grown Charismatic Renewal Ministries and the National Secretary of PFN who represented the PFN Chairman, Bishop Dr. Francis Wale Oke. He spoke on ‘Progressive Synergy of Church and Mission Agencies for Accelerated Harvest’. Major highlights from the message include the fact that Jesus is interested and ever conscious of the rippened harvest (Matt 9:35-38, Lk 19:10). He warned the church against being busily fixated on counting the number of sheep already in the fold instead of responding to the lost and needy sheep outside the fold, pleading and waiting to be brought in. He stated that the ‘era of autonomous missionless churches and autonomous churchless missionary societies must be over’ and that all must join ranks in the face of increasing threat of militant Islam and godless secularism in order to bring in the bountiful harvest. Areas of conflict between churches and missionary agencies must be resolved i.e. funding and control of the missionaries, he added. He concluded by reiterating the need for the churches and mission agencies to create a conducive atmosphere for mutual ownership of missional efforts that are intentional and functional, so that a harvest that delights the Master’s heart will be unleashed and accelerated with progressive synergy as the ‘whole Church takes the whole Gospel, to the whole world’.

The Nigeria Missions Security body was inaugurated to oversee missional responsibilities in relation to the security issues in the missions community and the nation. The chairman of this 13 man special committee is The Rev’d Dr. Gideon Para-Mallam. 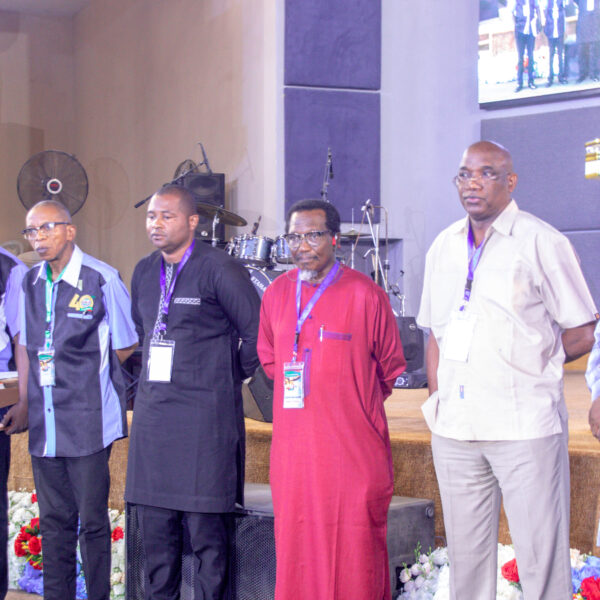 The Speaker for the last plenary session was Rev. Yemi Ayodele of the Church of the Nations, Texas, USA. The theme of his message was ‘The Synergy between the Church and the Lord of the Harvest’. He began by appreciating everyone who has contributed to the advancement of the God’s mission; the sacrifices and pains undergone by many. According to the speaker, it is a time of deep reflection and thanksgiving for what the Lord has done, as we remember the past and also look towards the future. The work is becoming more difficult and so, we must be more resolute and constantly encourage one another, he said. Even though we may excel in our Missiology and methodology but failing in the ‘God Factor’ will cause us to miss it. The church is in a comatose state and needs revival, which can only happen after repentance and asking for God’s mercy (2Chron 7:14, Prov. 28: 13). After doing our own part, the synergy comes into play with the Supernatural (Divine presence, visitation, encounter, enablement, manifestation, etc.). However he warned that, missional dependence on intellectual knowledge and capacity is an anathema. Hence, seeking God personally and corporately as a church and missions body is mandatory in order to experience revival and spiritual awakening. Daily personal assessment on our motives in our walk with God; having clean hands and pure hearts, intimacy with God , living humble, sincere and honest lives before God and man, being students and doers of the Word, holiness, sanctification, restitution, daily presentation of our lives to God, are all non-negotiable pre-requisites for sustainable revival.

Apparently, he regretted the fact that the missionary force among the young generation is missing due a great spiritual disconnect and must be addressed with great urgency or else, we stand to lose a whole generation of missional force. His talk was climaxed with the need for fresh unction of the Holy Spirit for consecration, wisdom, guidance and strength for the journey ahead: hence a time of prayer and re-dedication for both Clergy and Laity was done.

In 9 different categories, forty outstanding Leaders, staffs and partners of NEMA were given awards for their sacrificial contribution to the Association.

Prayers was said for the planning committee headed by Evang. Tokunbo Salami, whilst the closing prayer was done Rev. James Forlines of Final Command, USA.

On the whole, the 40th Anniversary celebration of NEMA was a great success as it was not only a time for all to celebrate but more so, to recalibrate and synergize to accelerate. Indeed, to God be the glory for awesome things He has done and will continue to do.